The HQ camera with C/CS-Mount is a big step forward. Lens is a crucial part in a camera system that needs flexibility. A single lens cannot meet all needs because the use case varies from one application to another. Sadly, V1 and V2 Pi cameras have glued stock lenses, which leave us little to customize. Although I do utilize an Orbi WiFi6 network, and have security cameras and other gadgets, we have done extensive troubleshooting and have found that these networks remain visible until the router is powered off. All of these networks appear in our WiFi list as 'BROADCOMGUEST03' (different numbers at the end).

With the release of the mid-2013 MacBook models, Apple stopped using the standard USB video device class interface for the laptops’ webcams. On these laptops, the webcam connects via the PCIe bus, enumerating as a Broadcom 1570 device. Unfortunately, this interface is completely undocumented, and there is no Linux driver, although an effort is being made to reverse engineer one. Since I thought understanding the device hardware might aid this driver development effort, I bought a replacement webcam to disassemble. The front of the camera, from left to right, contains a 12-pin connector; power management circuitry, consisting of some sort of crystal or resonator, a Texas Instruments TPS657091 power management IC, and assorted passives; an ambient light sensor (with decoupling capacitor); the image sensor and fixed-focus optics; and an LED. The back of the device contains identification markings, which include a DataMatrix barcode and text, both of which read CC2 3222 2UYE F9T9CF on my particular camera. 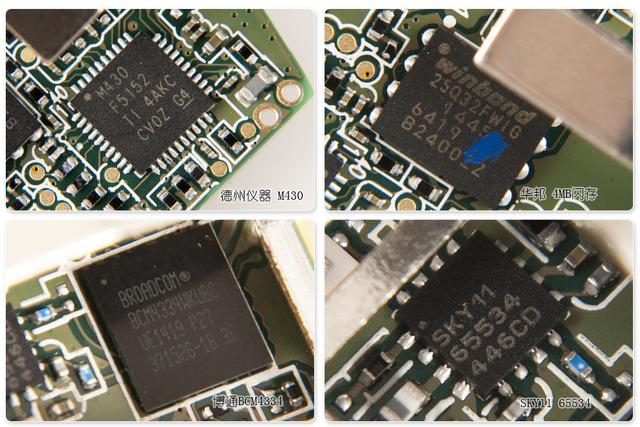 Prying the plastic piece holding the optics and ambient light sensor off of the PCB below it exposes the image sensor, LED, and a few more passives. What it doesn’t reveal is the Broadcom device that is on the PCIe bus (more on that later).

The OS X and Windows drivers for the camera make a reference to the OV5650 image sensor, but a quick visual comparison shows that this isn’t the sensor used. I was unfortunately unable to identify the sensor by looking at photos online and do not have access to a microscope capable of inspecting die markings. The driver also references the AD5816 focus controller, but this is unsurprisingly not present due to the fixed-focus optics.

Although the image sensor likely contains the readout circuitry needed to digitize the captured image, it doesn’t contain a PCIe bus interface (and Broadcom doesn’t make image sensors). Therefore, I turned to looking at MacBook teardowns to find the missing interface. The camera board connects directly to the main logic board, which just so happens to contain a Broadcom BCM15700A2 chip that no one seems to know the purpose of. As the part number contains the camera controller’s PCIe bus ID, it is very likely the chip in question, particularly since there are no other mysterious Broadcom chips on the logic board. In retrospect, it makes sense for this chip to be on the logic board and not by the camera, since PCIe signals are not normally carried over cables. A photo of the bottom of the chip on eBay shows that it is an 8 mm x 8 mm, 208-ball BGA, but I can’t find any other information about it. The chip is much too big to fit next to the camera, and its size suggests it probably doesn’t just serve as a PCIe interface and likely does some image processing as well. Although none of the information I discovered will likely be very helpful for writing a driver, locating and associating a part number with the PCIe interface chip was at least illuminating.

Microsoft rolled out the automatic update to the Windows 10 Fall Creators edition (late 2017). Windows has duly proceeded to update itself in Bootcamp, but the camera is no longer recognised. It seems to be a driver issue. However, Windows refuses to install the existing driver for the camera. The message says it's 'not intended for this platform'.

I've tried uninstalling the camera in Windows, and using the built-in function to 'update' the driver. Neither has worked.

Has anyone else encountered/solved this problem?

The hardware is Macbook Pro Late 2013 with High Sierra and Windows 10 64 bit.